Melvin Banister was about about to get married to his current wife, Canara, when he moved from Atlanta to Little Rock in 2013. He needed a steady job and truck driving was the perfect match because, as Banister explained, he had a love for travel.

Melvin started to work for PAM Transport October, 2013. He knew this was the right career choice after driving his first route, which ran to California and then back to Arkansas.

The fields of windmills and oil pumps encouraged Melvin (a former professional photographer) to pull his truck over so he could take photos of the landscape.

His love of photography further encouraged his new career choice. After only one year as a company driver, he decided to become his own boss as a PAM Owner Operator. He continues to use his work as opportunities to purse his photography passion.

Here are a couple of photos from Melvin’s travels: 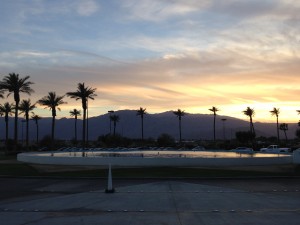 One of Melvin’s photographs of a California sunset 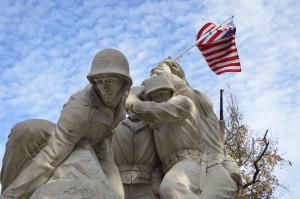 A picture taken by Melvin of the Iwo Jima memorial at the National Museum of the Marine Corps in Quantico, Virginia

On the Road as an Owner Operator

Today, Melvin drives the Laredo-Detroit dedicated lane as an Owner Operator. It only took one year as a dedicated company driver for Melvin to opt in to the PAM Overdrive Lease Program.

Melvin’s choice to become an owner operator on a dedicated lane was a great career move. He said it provided him with a better work-life balance, because he gets more home time.

And as an Owner Operator who buys his own fuel, Melvin gets to choose his route as long as he gets his freight to its destination on time.

“The main thing is, as long as you get your load there on schedule, you can do what you want,” he said. “You get a suggested route but are allowed to take the route you like.”

Sometimes, heading north from Laredo, Melvin will go via I-55 from Memphis toward Chicago. Or, he might head east on I-40 and pass through Nashville to catch the sights.

Melvin said that the opportunity to visit Nashville has made him consider buying Tennessee Titans season tickets. Because there is a TA/Petro station just two blocks from the stadium.

Melvin’s favorite sport, though, is basketball. He played for the U.S. Army, and he still tries to hit the court as much as possible. Today, he carries two basketballs in his truck: one for outdoors and one for the gym. He goes to LA Fitness in Woodhaven, Michigan every Monday morning.

Some of Melvin’s other favorite stops on the Laredo-Detroit route include great seafood eateries along the I-10 corridor. He particularly recommends the IP Casino in Biloxi. They have truck parking and are in walking distance to other casinos in the area, such as the Beau Rivage. 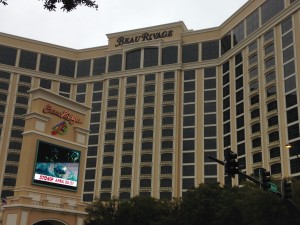 A photo taken by Melvin of the main building of the Beau Rivage Resort & Casino in Biloxi, Mississippi

His second favorite is the buffet at the L’Auberge Casino in Lake Charles. Melvin’s no gambler, though. He’s deliberate and careful with his money, as he is with his driving.

Before becoming an Owner Operator, Melvin earned multiple safety awards PAM gives its Company Drivers: a cap for three months of safe driving, a jacket for six months, and a ring for 12 months.

After many miles as an Owner Operator, Melvin is proud to report that his flawless safe driving record is still intact.

“I’ve had no citations, no accidents, nothing,” he said. “It’s just a matter of being alert and taking my breaks when I’m supposed to take them, and paying attention to what’s going on when on the road. There are times when everybody makes mistakes and things happen. But for me, I think being alert and carefully watching what I’m doing helps me avoid that.”

Melvin said he hopes to start his own little Owner Operator company driving for PAM.

“I’m looking to find a couple of qualified drivers and get them to apply at PAM,” he said. “If you know anybody, send them my way!”