PAM Transport, in association with The Larson Group/Peterbilt and Bravo3Zero apparel, is proud to present our Patriot Ride Fleet as a way to honor uniformed service members, past and present.

We refer to these professional drivers and service members as Ambassadors, and they continue to serve their country by safely delivering the goods needed to keep America moving.

The artwork on each of Patriot Ride Fleet trucks begins on the passenger side, at the very top back corner, and works its way around to the driver side of the truck. It commemorates key milestones in the history of each branch of the military. For the PAM Navy Patriot Ride truck, here are the unique sections: 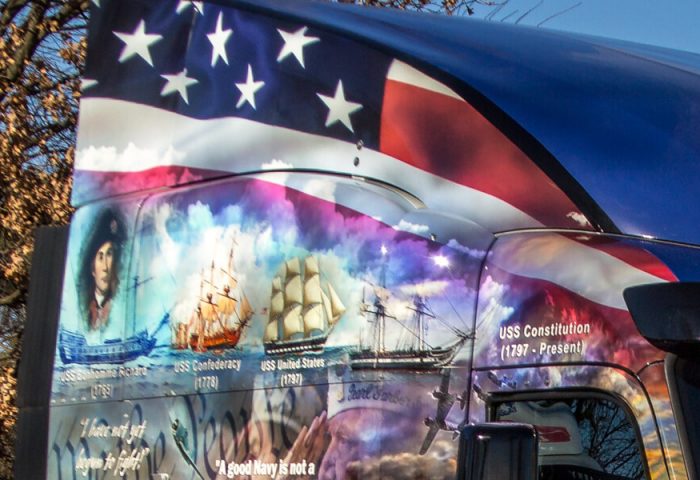 The USS Constitution, commissioned in 1797, is the only active warship in the U.S. Navy to have sunk another ship in combat. At the astounding age of 220 years, this wooden vessel is still fully operational — a great testament to the longevity of our nation. 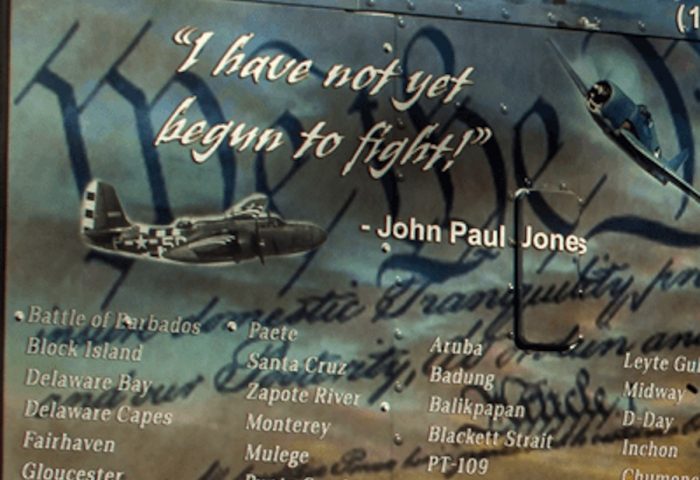 The famous words “I have not yet begun to fight!” were issued by John Paul Jones of the 42-gun USS Bonhomme Richard during the Battle of Flamborough Head when the Captain of the HMS Serapis called for Jones to surrender. Almost prophetically, Jones’s words set the tone for the dogged determination that has characterized the U.S. Navy ever since.

The Birth of the Modern Navy 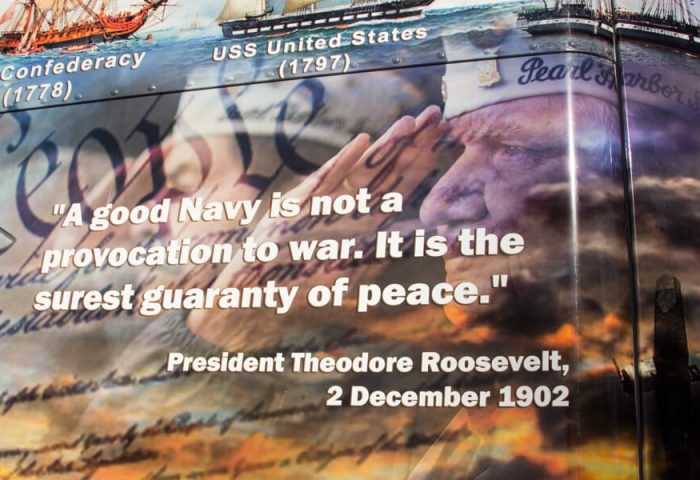 In his second address to Congress in 1902 — and partially in response to the development of the Panama Canal — Theodore Roosevelt strongly advocated for the United States to build the finest navy known to man as a way to protect our shores from would-be invading forces. For his efforts, Theodore Roosevelt is often referred to as the “father of the modern Navy.”

A Date Which Will Live in Infamy 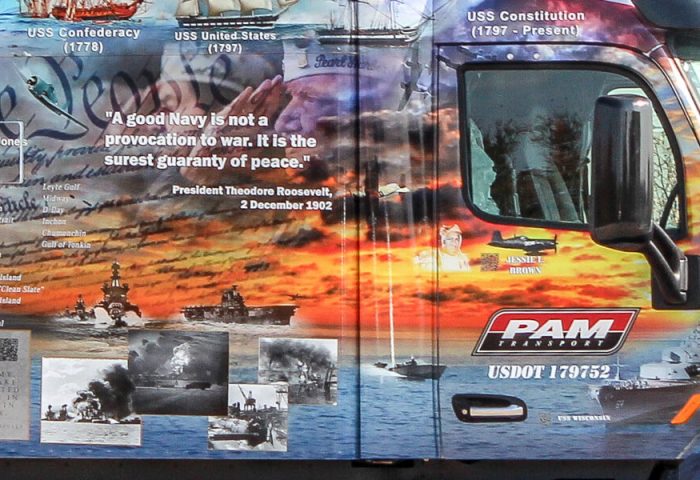 Despite Franklin D. Roosevelt’s efforts to keep the United States out of World War II, the Japanese attack on the Pacific Fleet at Pearl Harbor, Hawaii, and other locations on the morning of December 7, 1941, catapulted the U.S. headlong into the conflict. In total, 2,403 Americans died and 1,178 were wounded during the attack. To this day, 948 men remain entombed in the wreckage of the USS Arizona, which still rests at the bottom of Pearl Harbor. 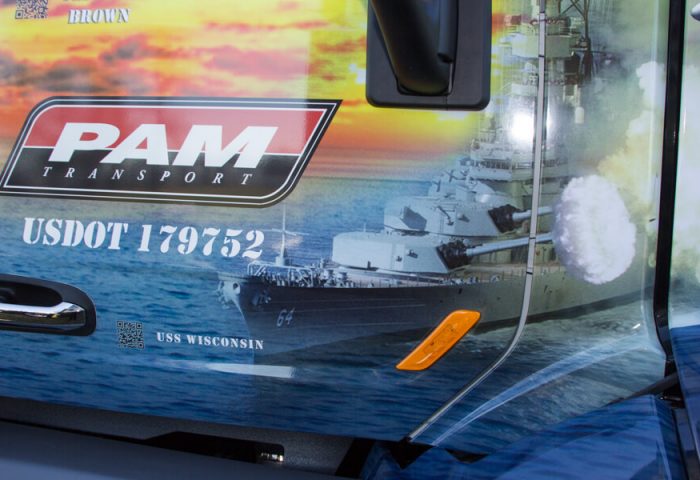 Commissioned in 1944, the Iowa Class Battleship USS Wisconsin served in World War II, the Korean War, and the Gulf War. It was finally removed from the Navy Vessel Register in 2006. Today it resides in Norfolk harbor and is  listed on the National Register of Historic Places. This image depicts the formidable battleship firing its 16-inch guns for the last time in 1991.

The Sea Is Ours 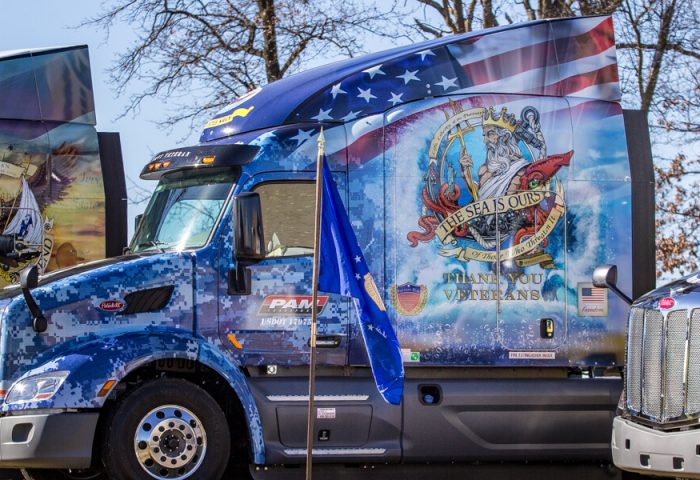 This symbolic centerpiece pays tribute to our naval heroes and their commitment to the defense of the United States. It includes a banner with the popular armed forces recruitment slogan, “Life, liberty, and the pursuit of those who threaten it,” which encircles King Neptune, the Roman god of the sea, who stands in support of the U.S. Navy.

A Big Enough Thanks 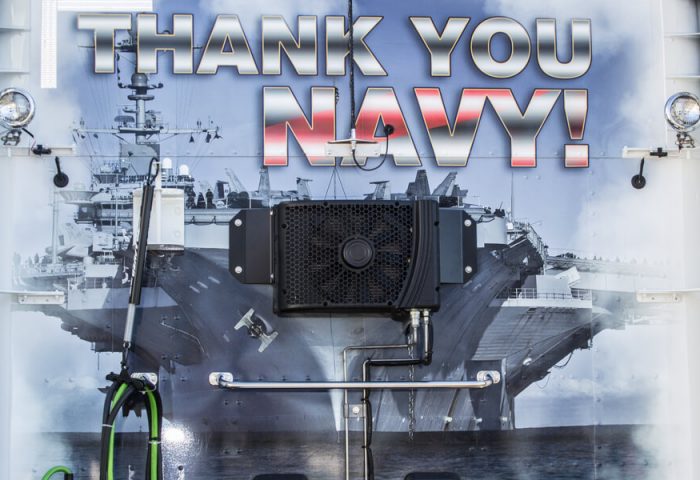 “Thanks” just doesn’t seem to communicate how much we value our Navy men and women, so we included an aircraft carrier to give a truer sense of the scale of our appreciation.