Say hello to Randy Magers, one of PAM’s star company drivers for over 25 years. Randy started his truck driving career with PAM, joining the Choctaw division in 1994. A meticulously safe driver with a great track record for delivering on time, he won PAM’s Driver of the Year award in 2012. 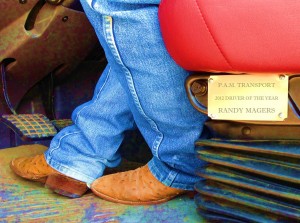 Although he is now retired, Randy was part of PAM’s dedicated company driver fleet running five days a week from Laredo, Texas to Lewisville, Texas. Home on the weekends, Randy had time enough to raise champion quarter horses with his wife Sue at their ranch, Running M Quarter Horses, in Comanche, Texas. Randy’s family is the only one to have two horses in the American Quarter Horse Association (AQHA) Hall of Fame.

Here’s a video of Poco Tivio, the Magers family’s latest hall-of-famer, being inducted into the AQHA Hall of Fame. Randy takes the stage at 3:48.

Prior to joining PAM, Randy also made his name in the rodeo. He rode in 101 rodeos, qualified for the National Finals Rodeo (NFR) nine times, and was named Professional Rodeo Cowboy Association Reserve World Champion twice. In addition, he served as rodeo coach at his alma mater Tarleton State College in Stephensville, Texas, where he earned a bachelor’s degree and a master’s degree in agricultural business.

Randy also has the distinction of being the only bull rider pictured on a commemorative Dr. Pepper bottle. Released for the 79th Annual Southwestern Exposition and Fat Stock Show in Forth Worth, Texas, in 1975, these bottles depict Randy riding a famous bucking bull bred by Beutler & Sons and can be found from time to time for sale on eBay for about $10 a pop.

To see Randy in action around the time Dr. Pepper decided to put his likeness on one of its bottles, you can watch this video of him riding Hall of Fame Bull Oscar at the 1975 NFR:

In Oscar’s first five years as a bucking bull, more than 100 cowboys tried to ride him and every one of them failed to make the eight-second horn. A bronze “Oscar” was offered by owner Rodeo Stock Contractors to the first man to ride him. The trophy wasn’t collected until 1975 when John Davis made it to the whistle. Following Davis’s historic accomplishment, only a handful of cowboys made an eight-second ride on Oscar, among them Randy Magers, who rode Oscar twice in his career.

Randy applied the same dedication he demonstrated as a rodeo bull rider to his truck driving career at PAM Transport. For over two decades, he was a company driver PAM could count on. We thank you, Randy!