Eighteen PAM drivers qualified for the drawing by making it to the top 10% of PAM’s company fleet when it comes to fuel efficiency. All received bonuses and were entered in the Giveaway drawing to win a Harley-Davidson motorcycle or one of the four Honda four-wheelers.

Here’s a bit more about the four lucky winners who won ATVs during the annual Giveaway. 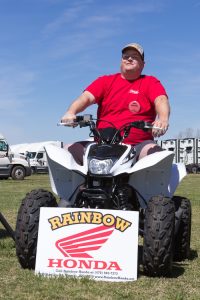 Before driving for PAM, Joel was a professional poker player. Once UIGA passed, he need a new career path. Trucking appealed because he only needed four weeks of schooling before he “could be out there making money.”

To make it to the MISSION MPG finals, Joel drove a 2013 International ProStar. He upgraded to a 2016 ProStar directly after the Giveaway.

“I guess the biggest thing that I do that I bet a lot of truckers don’t is I don’t stop. I try to align my day at the start — I wake up, I go to the bathroom, I get my food, I get my drinks set up, and I try to set it up so that my fuel stop and my 30-minute break are all at the same spot, and preferably at lunch or at dinner time, so that I only have one stopping point. . . . [Y]ou use up the most fuel when you are accelerating and decelerating and that’s going to be on your on and off ramps. So the less time you stop, the less fuel you use.”

“The scenery! You never really get too bored.“

Right now, Joel stays regularly at his sister and brother-in-law’s house. While there, he babysits his niece and nephew. “That’s my family and it works for us!” says Joel. “My brother-in-law is a teacher and my sister is a stay at home mom so it saves them money, let’s them go out occasionally!”

Joel does a lot of woodworking and has always had a talent for carving and making furniture. He designed and built most of the furniture in his sister and brother-in-law’s house.

Two-time MISSION MPG winner Shaun Nixon not only won a Honda four-wheeler this year — he walked away with the Grand Prize Harley in 2015!

From his hometown in Arlington, Texas, Shaun drives out of Irving, Texas and has been with PAM for nearly eight years.

After 35 years in retail, Shaun decided he wanted a career where he wouldn’t have to deal with the public or bosses who kept getting younger than him.

When he won the MISSION MPG Grand Prize last year, Shaun drove a 2014 International Freightliner Evolution. He’s just upgraded to a brand new 2016 International ProStar. It has a tank for diesel exhaust fluid (DEF), which can increase fuel economy if the engine is properly tuned.

“My basic philosophy is to drive within the parameters of the truck: use cruise control, never idle, never push. You know, there is a green light in the International that tells you when to shift; it’s about knowing the truck and knowing when to shift. I never top off the tanks to evaporation; a lot of people squeeze it in to try to get the dollars off the fuel card. That’s really the basic things. Drive slow, easy and safe! Never speed.”

“I really enjoy driving a truck and not being micromanaged. They just tell you where to go and when to be there. . . . I just enjoy traveling!”

Come June, Shaun and his wife Jodie will celebrate their diamond anniversary (30 years). They have two daughters, the eldest of whom gave birth to their first grandson earlier this year. Their plan is to let Jodie retire so she can become a full-time nanny and Shaun will keep trucking for a few years until their youngest daughter graduates from college.

Shaun loves to fish and golf, although he says he’s “pitiful at golf.” 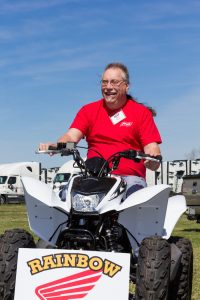 Say hi to Robert Shuler, a PAM company driver from Buford, Georgia. Come August, he’ll have been with PAM for five years.

Prior to joining PAM, Robert was an electronics technician at Sears for 14 years. He was inspired by his two brothers — both truck drivers — to go to trucking driving school in Indianapolis.

This last year, Robert drove a 2013 Freightliner Cascadia to qualify as a MISSION MPG finalist. He just upgraded to a new 2016 International ProStar and is excited to see if this truck pushes him into the top 10% next year so he can try for the Harley. He said he’s already saving 2 MPG!

“Getting home! I’m home every other night and every other weekend. I really enjoy working for PAM! They’re really driver oriented. ”

Robert and his wife Darlene, who is a school bus driver, have been married for 14 years. They have four children: a daughter, Porschia Michelle, who has three children of her own; a stepson, Zachary Densmore, who is 24 years old; and 13-year-old twins Robby and Paris.

Robert has a Corvette and is into NASCAR — he’s a big Dale Earnhardt, Jr. fan. 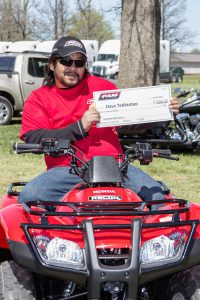 Based in Radcliff, Kentucky, Davy Tedtaotao has been with PAM for a little over a year but he’s already making a name for himself as a skilled driver.

When he first got out of truck driving school in Indianapolis, Davy was nervous. “I didn’t think I was going to pass,” he recalls. But both the school and orientation tests were no problem for him. Now he drives a 2015 International ProStar along a dedicated route from Lewisville, Texas to North Carolina and is home every weekend.

Prior to working with PAM, he was a machine operator at a recycling center.

When he’s not working, Davy enjoys spending as much time as he can with his daughters before he has to head back out on the road again. They go to a lot of movies and go out to eat together.

Keep up the great work, PAM drivers! You all are awesome!