Jim Carmichael joined the Marines in 1968, did a tour in Vietnam in 1970-1971, and got out later that year. He started driving for PAM Transport back in 1985, took a short break, and returned to the PAM team in 2004. In total, Jim has over 30 years on the road as a veteran driver for PAM Transport, and we appreciate his service as a Marine and his loyalty and dedication to PAM. 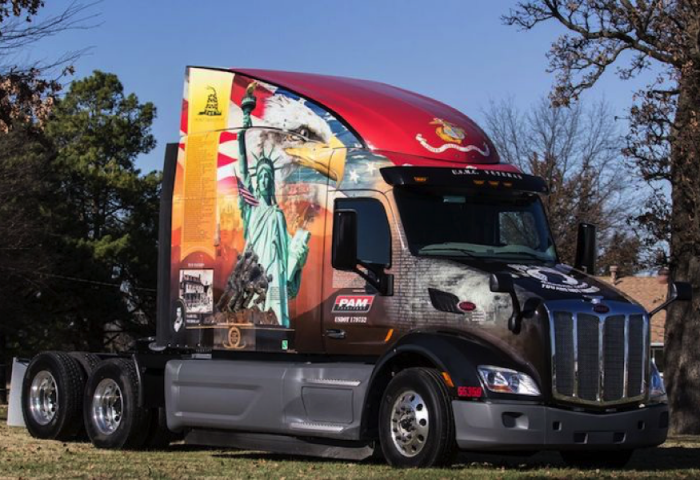 Each of the four new Peterbilt trucks in our Patriot Fleet is custom wrapped in distinct murals for each branch of the U.S. Military. The artwork on each truck begins on the right side, at the very top rear corner, working its way around to the left side of the truck to tell the story of each branch.

For the PAM USMC Patriot truck, here are the unique sections that comprise our artwork honoring those that serve in the USMC: 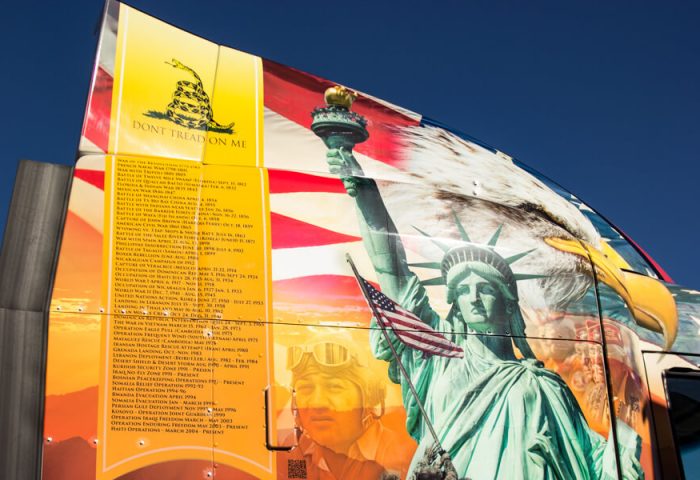 The Gadsden Flag’s “Don’t Tread on Me” was an early motto for the newly formed Continental Marines. Diamondback Rattlesnakes were common in the New England colonies, and the flag was clearly designed as a warning to the King and his soldiers. Below this symbol is a list of every engagement in which the U.S. Marines participated up to present day. 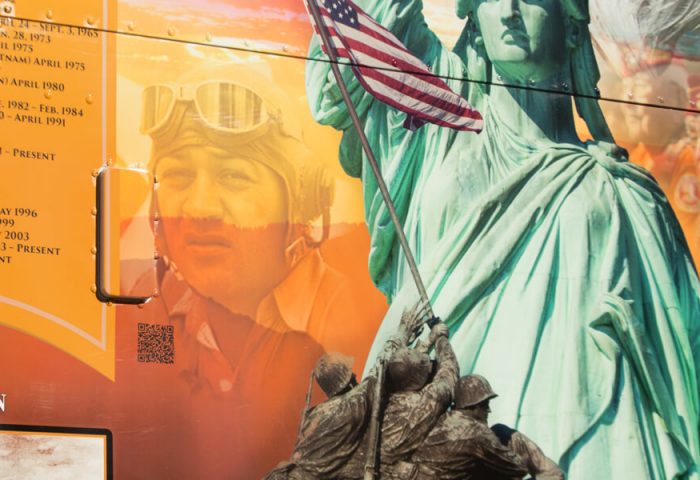 Gregory “Pappy” Boyington, leader of the Black Sheep Squadron and known as a “rough cut” individual, was extremely effective in developing close air support tactics during World War II for fellow Marines on the ground. Pappy was a combat pilot and USMC fighter ace who received both the Medal of Honor and the Navy Cross. Check out this video on the true story of the Black Sheep Squadron to learn more.

The Birthplace of the Marines 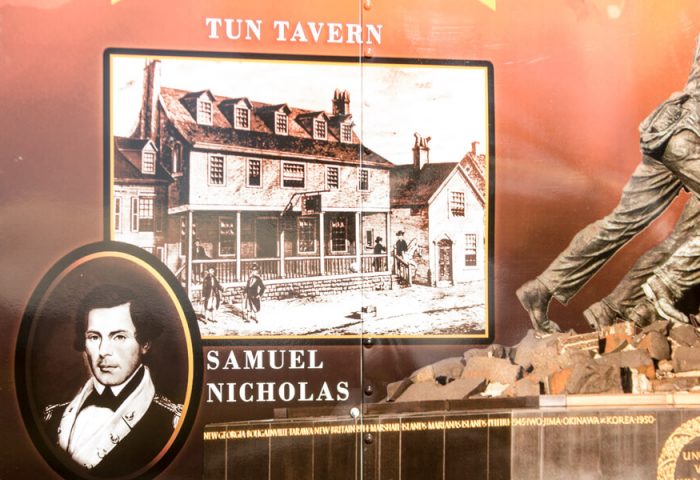 Samuel Nicholas was the first officer commissioned in the United States Continental Marines on November 28, 1775, which also means he is considered to be the very first Commandant of the USMC. Upon his commission, Nicholas immediately established Tun Tavern as the location for the first recruitment drive for the newly created Continental Marines. It has since been considered the “birthplace of the Marines.”

The Continental Marine Act of 1775 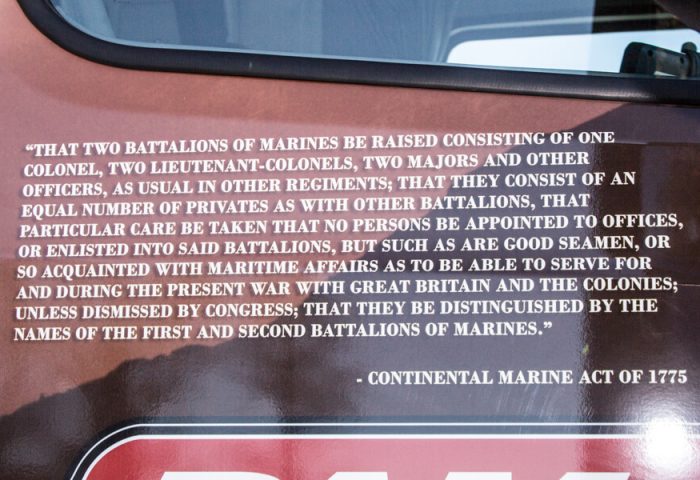 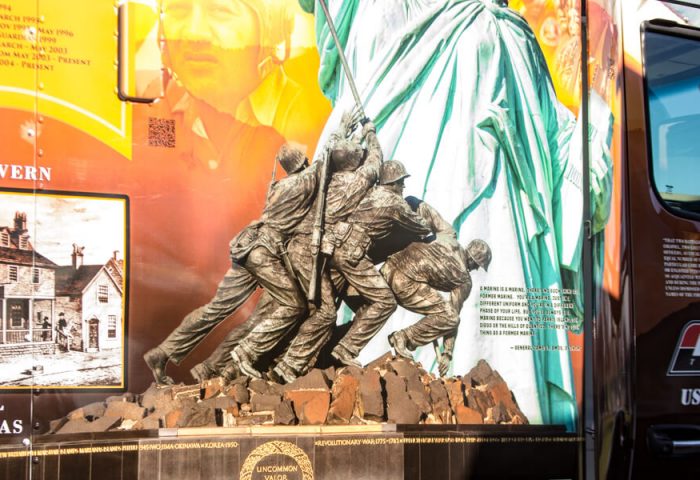 The five-week battle between U.S. Marines and the Japanese forces for this tiny yet strategic island was some of the bloodiest and fiercest fighting seen during the Pacific War of World War II. On February 23rd, 1945, six Marines raised the American flag atop Mt. Suribachi, an iconic moment captured by photojournalist Joe Rosenthal and later used in 1954 by Felix de Weldon to create the Marine Corps War Memorial.

“A Marine is a Marine” 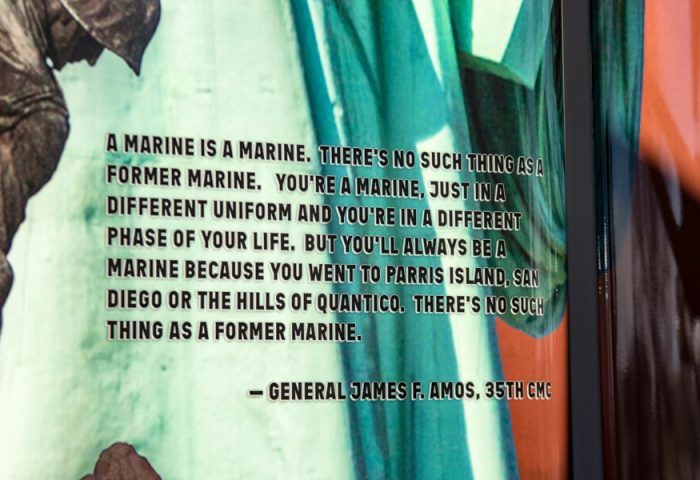 The sentiment captured in this section of the truck wrap doesn’t just apply to United States Marines, but they do get credit for establishing the concept. This quote by General James F. “Jim” Amos – who served as the 35th Commandant of the Marine Corps (the first USMC aviator to do so) – speaks to an important truth: You can take the individual out of the military, but you can’t take the military out of them. 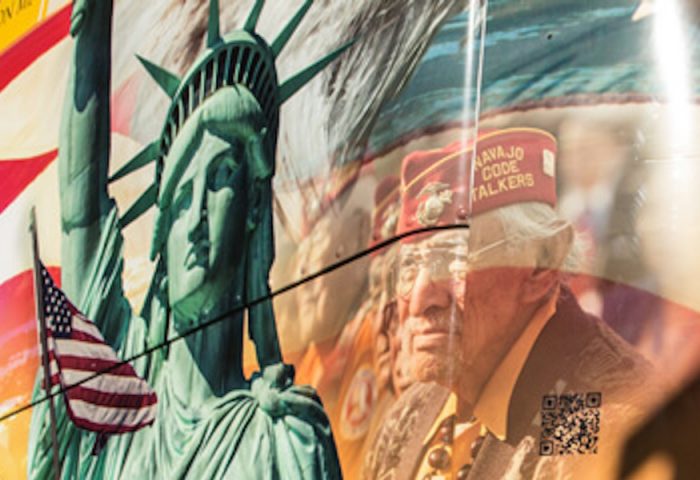 The Navajo code talkers are credited with not only the Marines’ success at Iwo Jima, but turning the tide of the war for America and the Allied troops by deploying their unbreakable code. Check out this interview with Corporal Chester Nez, WWII Marine and last of the original Navajo code talkers. Godspeed, Marine. 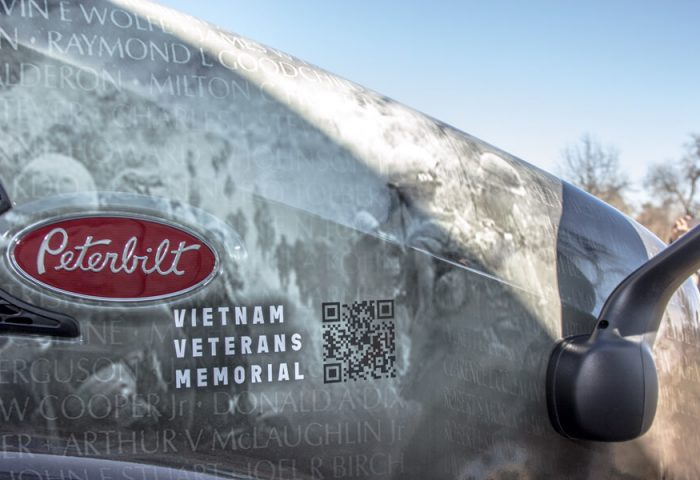 One can only imagine what it might be like to experience the memories of a Vietnam Marine. In this section of the wrap near the right front cowl, you see images of veterans, heads bowed, with their hands on the Vietnam War Memorial, looking past the names of their brothers and sisters and into the black granite where their memories live.

“You Are Not Forgotten” 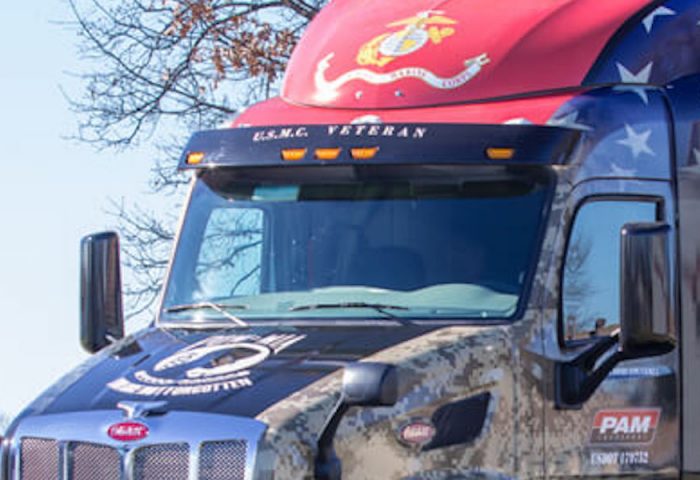 POW/MIA (Prisoner of War / Missing in Action) – There are still American service members who have not returned home from their respective wars. We fly this flag to remind our citizens that “out of sight” should never mean “out of mind.” Thousands of men and women work hard every day to find, identify, and return our lost & missing soldiers to their country. “You are not forgotten.” 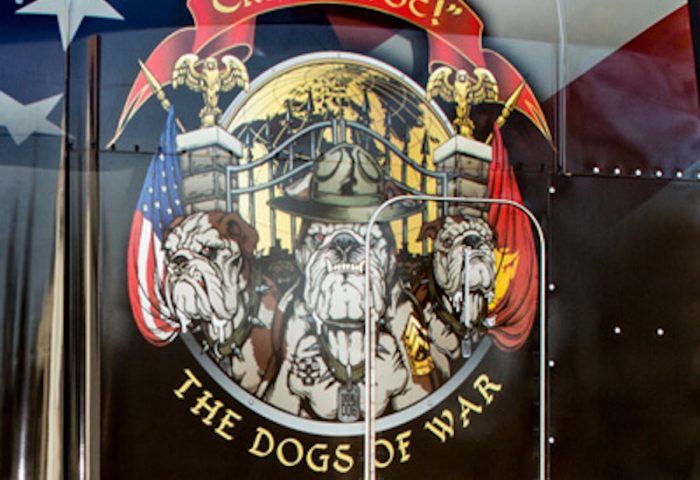 An appropriate quote for the relentless and ferocious fighting force nicknamed “Teufel Hunde,” or “Hounds from Hell” by the German troops during the Battle of Belleau Wood in World War I. In ancient times, dogs were commonly used as a first line of attack against opposing armies. Devil Dog is seen as a term of endearment among United States Marines. 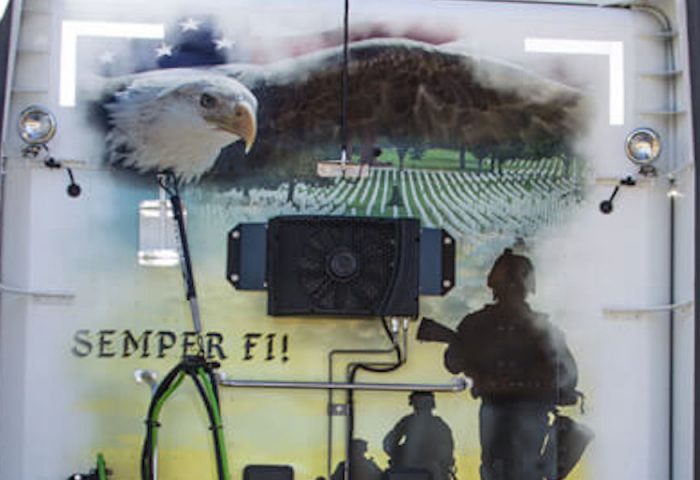 In the final section of our USMC Patriot truck wrap, the eagle flies in defense of its home with a star spangled banner flying proudly behind it, while those who have given their lives in service rest peacefully under its wings. Semper Fidelis!, Latin for “Always Faithful,” communicates a much deeper message of brotherhood, esprit de corps, and willingness to be there for, and if necessary, sacrifice oneself for fellow Marines.